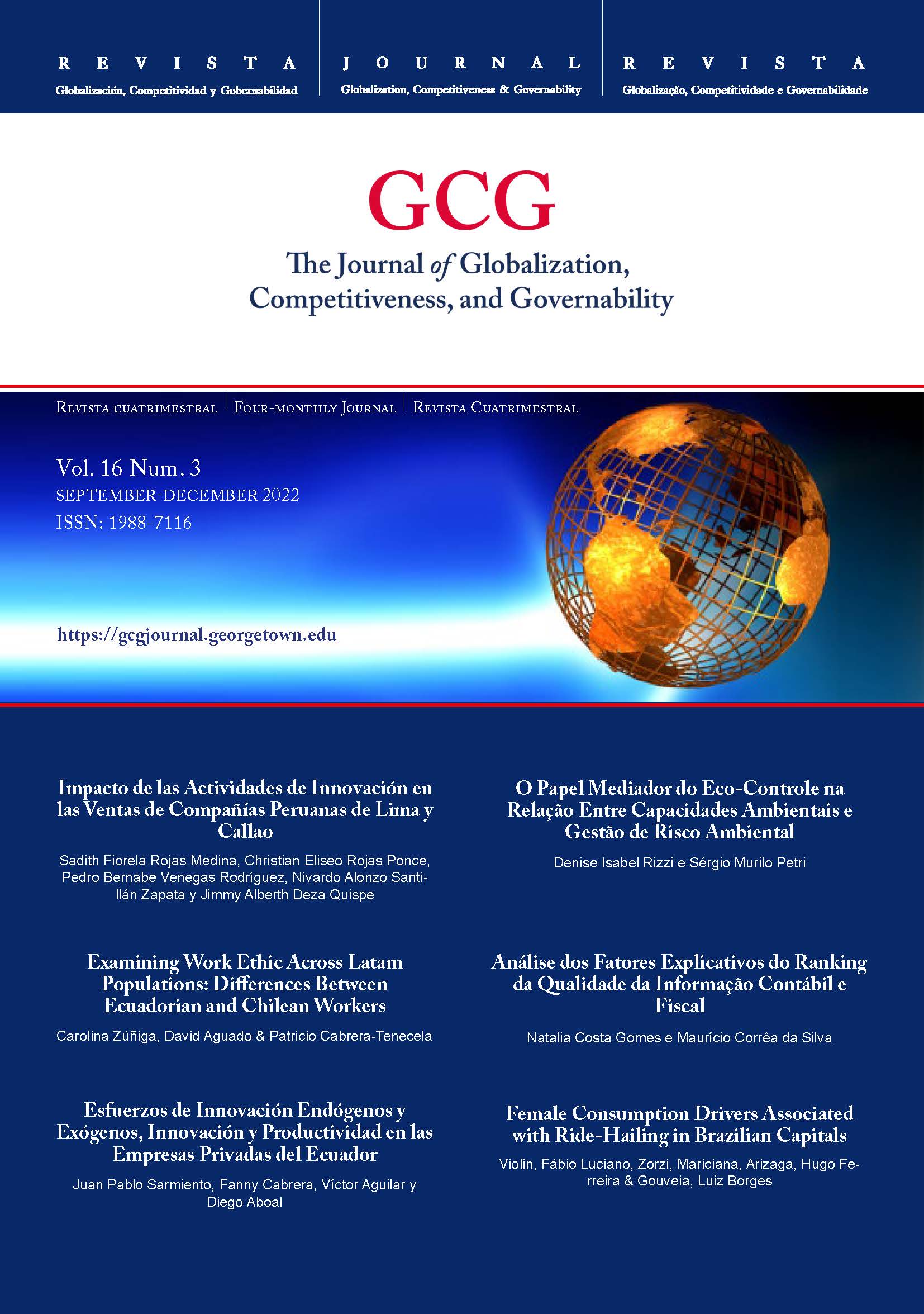 With Volume 16, Issue 3, Georgetown University celebrates 15 years of its Journal of Globalization, Competitiveness, and Governability (GCG), the first digital academic journal of Georgetown University. LALP Executive Director and MSB Professor Ricardo Ernst has served as editor-in-chief since its inception.

The journal, which was launched as a partnership of Universia and Georgetown University and is now currently managed by LALP at the McDonough School of Business, aims to become a source of new ideas about the effects of globalization on the competitiveness and governability of businesses and countries in Latin America, and particularly on the tools available to managers and politicians to design better strategies to benefit their respective businesses and countries.

GCG made its debut in November 2007 with the first triannual number (volume 1, number 1), and after the successful launch, this young journal has become one of the foremost Ibero-American journals in the fields of globalization, competitiveness, and governability. These 15 years have served to ascertain that GCG is an excellent venue for developing a better and deeper understanding of the challenges, problems, and opportunities faced by the region and for encouraging cooperation among international academic communities. Combining the themes of Globalization, Competitiveness and Governability has been an interesting attempt to merge for the first time the interrelations that exist among all actors of society. We believe GCG is helping to enrich the debate on those important issues and building bridges between academic rigor and practical realities. Overall, GCG is featured prominently with an impact on the knowledge, theories, and application of those theories in the challenging environment of Ibero-America.

Since the creation of the journal many things have changed over time. Indeed, during all these years the journal has tried to answer hundreds of questions, and not surprisingly, it has also unlocked hundreds of more questions. But, as always, this non-ending debate of questions and answers builds the advancement of any field of knowledge, and we believe there is a bright future for a better understanding of the challenges of Ibero-America and in particular Latin America for better governance, wider globalization, and higher competitiveness. GCG is definitely devoted to helping in that endeavor.

In the first article, Sadith Fiorela Rojas Medina, Christian Eliseo Rojas Ponce, Pedro Bernabe Venegas Rodríguez, Nivardo Alonzo Santillán Zapata, and Jimmy Alberth Deza Quispe from Universidad Continental (Peru) seek to demonstrate the validity of the LASSO machine learning tool considering nine innovation activities and data from the Peruvian Ministry of Production survey, in order to explain the business performance of Peruvian companies located in the urban area of Lima and Callao. Once the most important variables were identified, Logit regressions were performed, selecting those that were supported by theory. The authors conclude that there are three variables that increase the probability of sales improvement: (a) innovation activities in capital goods, (b) marketing, and (c) intangible assets.

As the volume of trade increases in South America, understanding cultural differences between countries will become increasingly important for managers to develop good human resource practices. Carolina Zúñiga and Patricio Cabrera-Tenecela (Universidad Politécnica Salesiana, Ecuador) and David Aguado (Universidad Autónoma de Madrid, Spain) seek to analyze the differences in Protestant Work Ethic (PWE) values between Ecuador and Chile, and to evidence, the dimensionality and factorial invariance of a short version of the most widely used scale to measure the work ethics construct "Multidimensional Profile of Work Ethics" in two South American populations. The authors conclude that there is configurational invariance, metric invariance, and partial scalar invariance for MWEP values. Regarding differences in PWE, they found that Ecuadorian and Chilean workers differ in self-sufficiency, leisure, delayed gratification, and lost time.

The objective of the following article is to determine whether there are significant differences in innovation investment outcomes – specifically in the probability of innovating in products and/or processes and in labor productivity – when distinguishing between endogenous and exogenous innovation efforts. Juan Pablo Sarmiento, Fanny Cabrera, Victor Aguilar (Universidad de Cuenca, Ecuador) and Diego Aboal (Universidad ORT Uruguay) use data from Ecuador's 2012-2014 innovation survey. The evidence suggests that endogenous innovation has an impact on the probability of introducing innovation in products and/or processes on the order of double that of exogenous innovation, also showing a greater impact on labor productivity.

Denise Isabel Rizzi and Sérgio Murilo Petri (Universidade Federal de Santa Catarina - UFSC, Brazil) try to verify to what extent the environmental capabilities of the Natural Resource-Based Vision Theory are reflected in environmental risk management, mediated by ecocontrol. They use structural equation modeling, with questionnaire data collected from 142 industries. The results show that managers are adopting ecocontrol practices. In addition, they find that the mediating role of ecocontrol promotes environmental capabilities and contributes to better environmental risk management. For the authors, the research contributes to the ecocontrol literature by corroborating the relevance of this tool for industries and environmental preservation.

The following article analyzes the explanatory factors of the Accounting and Tax Information Quality Ranking of Brazilian municipalities for 2019. Natalia Costa Gomes and Maurício Corrêa da Silva ((UFRN - Universidade Federal do Rio Grande do Norte, Brazil) use the GLM regression model with Gamma Distribution and the identity link function to analyze the 5,570 Brazilian municipalities. The results showed that the variables FIRJAN Municipal Development Index (IFDM), Municipal Management Effectiveness Index (IEGM) and GDP per capita of municipalities located in the Southeast and North regions and municipal management with center-left partisan ideology bias influence the ranking score.

The last article analyzes an explanatory model of female consumption behavior associated with ridesharing in Brazil. Violin, Fábio Luciano (State University of São Paulo, Brazil), Zorzi, Mariciana (Universidad de la República UDELAR), Arizaga, Hugo Ferreira (Universidad de la República (Uruguay), and Gouveia, Luiz Borges (Universidade Fernando Pessoa, Brazil) conducted 2176 interviews in representative capitals of the five regions of the country. For the authors, the results represent a theoretical advancement by revealing the commutativity of variables according to the reasons for use and the period of travel, which modify the order and degree of importance of the inducers of decision-making. The results indicate that in situations of leisure or social obligations at night, the level of relevance of the variables related to forms of harassment and self-preservation increases.

Once again, we would like to thank all those who make the smooth operation of the journal possible: members of the Advisory Board, Editorial Board, Area Editors and Associate Editors, evaluators, authors, and, above all, the readers.