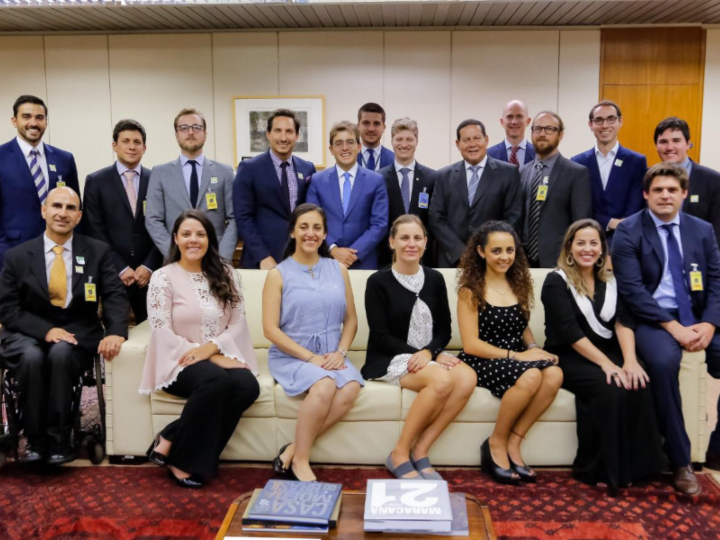 Last November, in Porto Alegre Brasil, the annual GCL Alumni meeting took place. The encounter was not only held at Porto Alegre but also had some legs in complementary cities to make it even richer for the participants.

The first day of activities happened on November 6th in the countries capital, Brasilia. The GCL alumni were able to visit the National Congress and the Planalto Palace, also, they were able to have an open conversation with relevant political actors including; Tereza Cristina, Agricultural Minister, Congressmen Alcolumber and Maia, Justice Minister Sergio Moro and Vicepresdient Hamilton Murão.

Thursday 7th saw the beginning of the main event, which took place in Porto Alegre City, in south Brasil. Activities began with the “Political Renewal” Panel, led by congressmen: Marcel Van Hattem (GCL 2009), Fabio Osterman (GCL 2009) y Felipe Camozzato (GCL 2016), who shared with the alumni their outlook on country’s politics and the need to come up with fresh and new ways to make policy in Latam, a cocktail took place afterward.

Before the day’s break the renowned scholar Murilo Aragão presented the team with a deep analysis of the region’s status in many topics, allowing alumni to better understand the perspective and challenges of Latin America in policy and economics, an open Q&A session followed.

The afternoon was followed by a city tour, in connection with the screening of a shortened version of the “Poverty Inc” movie, then a discussion with the movie’s director Michael Mathison, Ricardo Ernst, executive program director and William Ling, Instituto Ling’s director followed, which served as a day wrapper.

Saturday 9th presented a great surprise for the team, a powerful talk on leadership by Bernardo Rezende “Bernardinho”, many times awarded Olympic coach. A profound Q&A session caught the eye of the public, with some case discussion, fostering on leadership and teambuilding.

The event concluded with a debate on Public Policy and Innovation, chaired by Antonia Martins (GCL 2017) and Paulo Uebel (GCL 2008) where they personal challenges were shared, along with advice on how to quickly and efficiently drive change in government organizations.

As a warm closure to the event, alumni traveled to nearby city of Gramado to attend Luciano Peccin’s lecture on how to create planned cities, leveraging on their competitive advantages.

We deeply thank all of the GCL in Brasil that coordinated this great event, the Ling Institute (Instituto Ling) that hosted the sessions.