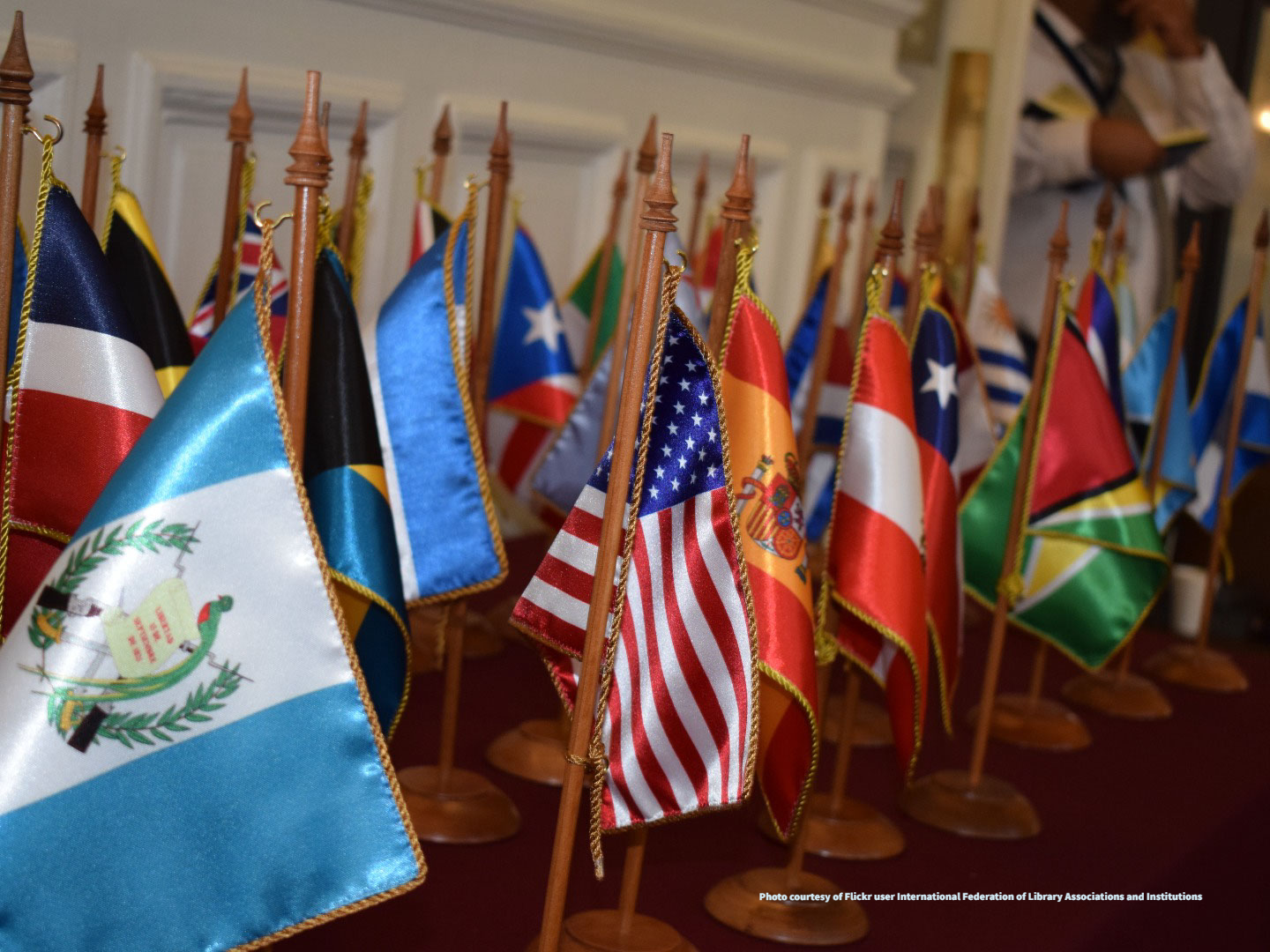 The Georgetown Americas Institute invites you to join us for a symposium in celebration of its inaugural year. Heads of state from across the Americas will discuss the key challenges and opportunities facing the region. Speakers will include President Bill Clinton (SFS'68), former president of Uruguay Luis Alberto Lacalle Herrera, former president of Colombia Juan Manuel Santos, and former president of Mexico Ernesto Zedillo.

Since the first Summit of the Americas, hosted by President Clinton in 1994, the region has made great progress in economic development, integration, and deepening democratic values. This past summer, leaders met for the ninth summit now facing a new set of challenges: rising inequality, weakened democratic systems, and the devastating effects of climate change. How can countries across the Americas collaborate to move forward and address these issues? What lessons can be learned from past leaders in overcoming shared challenges? To discuss these questions and celebrate its first year of work, the Georgetown Americas Institute is pleased to host four former presidents from across the Western Hemisphere for two panels on the current state of inter-American affairs.

It is with great appreciation that we recognize our generous benefactors Rolando (C’68) and Monica Gonzalez-Bunster (Parents ’00, ’05, ’14, ’16) who made a transformational gift commitment to establish the Americas Institute at Georgetown University.

GU ID is required for entry. Admission is free and will be on a first-come, first-served basis. All visitors will be subjected to a bag check by GUPD. Enter through the south tower of Healy Hall. Ticket distribution is in the corridor on the second floor of Healy Hall. Food and drink are prohibited in Gaston Hall. Georgetown University is a fully-vaccinated community and all campus visitors must be in compliance with the university’s public health guidelines.

Accommodation requests related to a disability should be made by November 24, by emailing americas@georgetown.edu. A good faith effort will be made to fulfill requests.

4:00 p.m. – 5:00 p.m. EST | Presidential Perspectives: The State of Affairs of Latin America and the Caribbean

Bill Clinton (SFS’68), the first Democratic president in six decades to be elected twice, led the United States to the longest economic expansion in American history, including the creation of more than 22 million jobs. After leaving the White House, President Clinton established the William J. Clinton Foundation. Today, the renamed Bill, Hillary & Chelsea Clinton Foundation works to improve global health and wellness, increase opportunity for girls and women, reduce childhood obesity, create economic opportunity and growth, and help communities address the effects of climate change. The foundation has staff and volunteers around the world working to improve lives through several initiatives, including the independent Clinton Health Access Initiative, the Clinton Climate Initiative, the Clinton Development Initiative, and the Clinton Giustra Enterprise Partnership to promote sustainable economic growth and fight climate change worldwide in Africa, Latin America, and the Caribbean. Established in 2005, the Clinton Global Initiative brings together global leaders to devise and implement innovative solutions to some of the world’s most pressing issues. So far, more than 3,600 Clinton Global Initiative commitments have improved the lives of over 435 million people in more than 180 countries.

John J. DeGioia (Introduction) is the 48th President of Georgetown University.  For nearly four decades, Dr. DeGioia has worked to define and strengthen Georgetown University as a premier institution for education and research. A graduate of Georgetown, DeGioia served as a senior administrator and as a faculty member in the Department of Philosophy before becoming president on July 1, 2001. He continues to teach an Ignatius Seminar each fall, which is part of a program offering first year students the opportunity to encounter unique courses of study inspired by the Jesuit educational theme of cura personalis (“care for the whole person”). DeGioia earned a bachelor’s degree in English from Georgetown University in 1979 and a Ph.D. in Philosophy from the University in 1995.

Diana Kapiszewski (Moderator) is an associate professor of government at Georgetown University. She received her PhD in political science from UC Berkeley in 2007. Her research interests include public law, comparative politics, and research methods. Her current work examines judicial politics in Latin America, in particular the judicialilzation of electoral governance in Brazil and Mexico. In the area of research methods her foci are strategies for generating qualitative data and making qualitative research more transparent. Her work has appeared in Latin American Politics and Society, Law and Social Inquiry, Law & Society Review, Perspectives on Politics, and PS: Political Science and Politics; she has also published various books with Cambridge University Press.

Luis Alberto Lacalle Herrera served as president of Uruguay from 1990 to 1995, and is a former president, legislator, and senator. As a licensed lawyer, member of congress, senator, and former president of the Republic of Uruguay, President Lacalle has been recognized for his achievements by the governments of Argentina, Brazil, Chile, Ecuador, Paraguay, and Spain. He has received honorary degrees from the Hebrew University of Jerusalem, Complutense University of Madrid, National University of Paraguay, and the Autonomous University of Guadalajara. In June 1993, President Lacalle was appointed a Knight Grand Cross of the Order of St. Michael and St. George by Queen Elizabeth II of England. President Lacalle is a member of Club de Madrid, Cárter Center, and Friends of Israel.

Juan Manuel Santos was the president of Colombia from 2010 to 2018. During his time in office, the historic Colombian Peace Agreement was signed on November 24, 2016. Santos was the sole recipient of the Nobel Peace Prize in 2016 for ending the longest armed conflict with the oldest guerrilla force in the Western Hemisphere. Before serving as president, Santos served as minister of foreign trade and was elected to the Colombian Congress as the presidential designate (similar to the role of vice president in the United States). He also served as minister of finance and minister of defense. Prior to serving in government roles, Santos was a deputy publisher and journalist with the Colombian publication El Tiempo. He won the King of Spain Prize for journalism for a series of articles looking at corruption within the Sandinista Revolution in Nicaragua. Santos is a graduate of the Naval Academy in Cartagena. He holds a degree in business and economics from the University of Kansas.

Melanne Verveer (Moderator) is the executive director of the Georgetown Institute for Women, Peace and Security. Verveer previously served as the first U.S. Ambassador for Global Women’s Issues, a position to which she was nominated by President Obama in 2009. She coordinated foreign policy issues and activities relating to the political, economic and social advancement of women, traveling to nearly sixty countries. She worked to ensure that women’s participation and rights are fully integrated into U.S. foreign policy, and she played a leadership role in the Administration’s development of the U.S. National Action Plan on Women, Peace and Security. From 2000-2008, she was the Chair and Co-CEO of Vital Voices Global Partnership, an international NGO that she co-founded to invest in emerging women leaders. During the Clinton administration, she served as Assistant to the President and Chief of Staff to the First Lady. She also led the effort to establish the President’s Interagency Council on Women, and was instrumental in the adoption of the Trafficking Victims Protection Act of 2000.

Alejandro Werner (Introduction) is the founding director of the Georgetown Americas Institute and a non-resident senior fellow at the Peterson Institute. Previously, he was director of the Western Hemisphere Department at the International Monetary Fund and undersecretary in Mexico’s Finance Ministry.

Ernesto Zedillo is a senior fellow at the Jackson School of Global Affairs and Frederick Iseman ’74 director of the Program for the Study of Globalization; professor in the fields of economics and political science; and adjunct professor of Environmental Studies at Yale University. He served as president of Mexico from 1994-2000. He is a member of The Elders, an independent group of global leaders using their collective experience and influence for peace, justice and human rights worldwide. In 2020, he was asked to serve on the Independent Panel for Pandemic Preparedness and Response (IPPPR), mandated by the World Health Assembly to analyze the Covid-19 pandemic. Currently he serves on the Global Commission on Drug Policy and on the Selection Committee of the Aurora Prize for Awakening Humanity and the Hilton Humanitarian Award. He is a member of the Group of 30, a consultative group on international economic and monetary affairs.