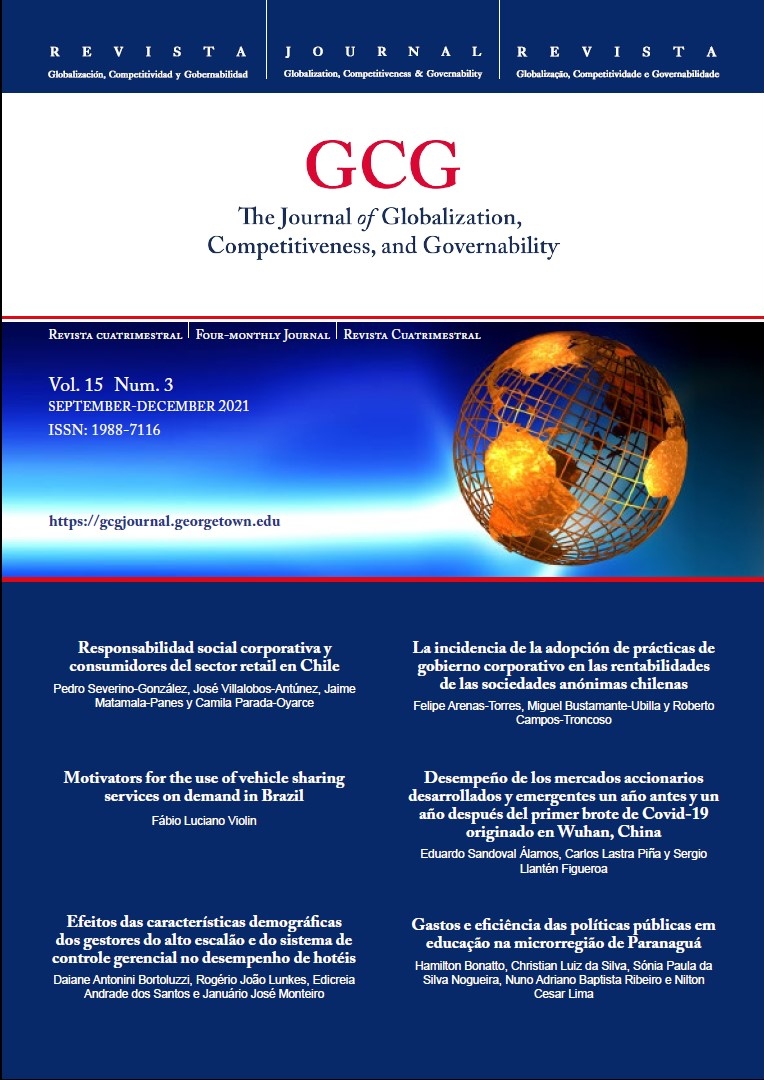 The Journal of Globalization, Competitiveness, and Governability, published by Georgetown University, aims to become a source of new ideas about the effects of globalization on the competitiveness and governability of businesses and countries in Latin America, and particularly on the tools available to managers and politicians to design better strategies to benefit their respective businesses and countries.

Corporate social responsibility makes it possible to manage strategies that seek to satisfy the needs of stakeholders. The first article - by Pedro Severino-González, José Villalobos-Antúnez (Universidad del Zulia, Venezuela); Jaime Matamala-Panes; and Camila Parada-Oyarce (Universidad Católica del Maule, Chile) - analyzes the perceptions of the expectations of retail consumers on corporate social responsibility. The research applies factor and mean differences analysis to survey data. According to the authors, the results show a high valuation in the economic dimension, presenting significant differences in gender, level of urbanization, and level of schooling, with particular emphasis on the philanthropic dimension.

In the next article Fábio Luciano Violin (Unesp - São Paulo State University, Brazil) tries to determine the motivating factors for the use of on-demand means of transport in Brazil. The methodological procedures involved Exploratory Factor Analysis to validate the variables, and Confirmatory Factor Analysis to establish the adjusted model and the dimensions in which these elements affected users' perception. The authors conclude that the motivators were relevant, however, only three variables of utilitarian character are strongly linked to the consumption process, the cost, the moment of use, and the technological facilitator as indicators of the use of this type of service in Brazil.

Daiane Antonini Bortoluzzi; Rogério João Lunkes; Edicreia Andrade dos Santos (Universidade Federal do Paraná - UFPR, Brazil); and Januário José Monteiro (Universidade Federal de Santa Catarina, Brazil) attempt to analyze the effects of demographic characteristics (gender and education) in managers, and how management control systems affect hotel performance. To do so, the authors use structural equation modeling to analyze survey data collected from 78 large hotels in Brazil. The results show that managers' characteristics, such as gender and education, determine how the management control system is used during the decision-making process. The authors conclude that managers' characteristics impact organizational performance if they adopt the use of management information interactively.

The fourth article aims to determine whether the adoption of corporate governance practices has a positive and significant impact on the profitability of Chilean companies. The study considered a sample of 903 reports between 2015 and 2019. For Felipe Arenas-Torres; Miguel Bustamante-Ubilla; and Roberto Campos-Troncoso (Universidad de Talca, Chile), the research of the descriptive-correlational type, demonstrates an incipient degree of adoption at the market and economic sector level, increasing the heterogeneity of results regarding the relationship between corporate governance and financial performance. Significant incidence is reached in some economic sectors, with respect to the categories of operation of the board of directors and evaluation by an independent third party.

The research developed by Eduardo Sandoval Álamos; Carlos Lastra Piña; and Sergio Llantén Figueroa (Universidad Tecnológica Metropolitana, Chile) analyzes the performance of developed and emerging stock markets, one year before and after the first outbreak of Covid-19. For this purpose, the "Jensen's Alpha" is used, based on the 5-factor model of Fama & French, estimated by generalized least squares (GLS). According to the authors, the results indicate that during the crisis, the stock markets of Germany, Austria, Spain, Holland, Portugal, Brazil, Chile, Malaysia, Russia, South Africa, and Thailand destroyed value while China and South Korea presented good performance associated with successful monetary and fiscal policies, and thus represents a viable option for global investors.

The last article, written by Hamilton Bonatto; Christian Luiz da Silva (Universidade Tecnológica Federal do Paraná, Brazil); Sónia Paula da Silva Nogueira; Nuno Adriano Baptista Ribeiro (Instituto Politécnico de Bragança. Brazil); and Nilton Cesar Lima (Universidade Federal de Uberlândia, Brazil), seeks to evaluate the evolution of public spending and analyze the efficiency of public policies in the educational sector in the municipalities of the Paranaguá-PR micro-region through Data Envelopment Analysis (DEA). The authors conclude that the quality of public education is directly proportional to the investment in these municipal public policies and, in terms of efficiency, it is observed that, both by the CCR method and by the BCC method, there is considerable homogeneity among the municipalities.

Once again, we would like to thank all those who make the good operation of the journal possible: members of the Advisory Board, Editorial Board, Area Editors and Associate Editors, evaluators, authors, and, above all, the readers.