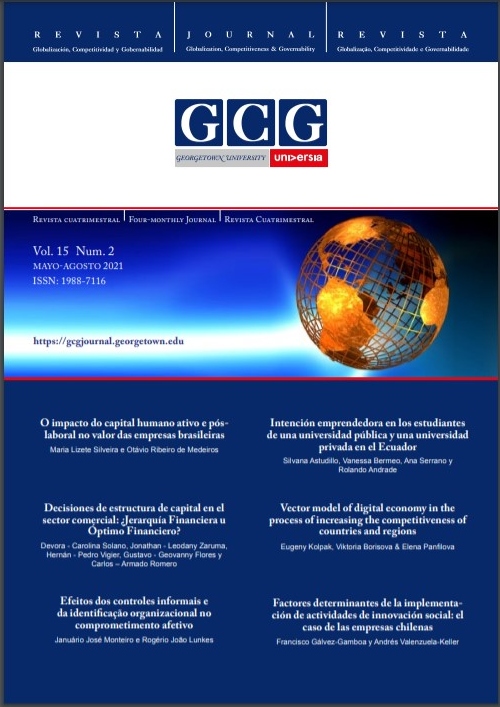 We wish to inform you that this issue of the Journal of Globalization, Competitiveness, and Governability is the last to be published jointly with Universia. From volume 15 number 2 onwards, the journal will be published by Georgetown University only. It will at no time cease to be published and will continue, uninterruptedly, to strengthen its editorial line and position.

Since Universia communicated to the Management Committee that journal publication was not included in its new strategic lines, we have together addressed how to at least sustain the legacy already recognised and how to make sure these changes affect the readers and authors of the journal as little as possible.

We would like to thank Universia for the opportunity it has provided to the Latin American academic community with the creation – together with Georgetown University – of the GCG Journal. Since the first issue was published in November 2017, 42 issues have been published faithfully complying with the frequency and guaranteeing internationally recognised principles of editorial quality. The GCG journal is indexed in the principle international repositories and databases and is a benchmark for the Latin American academic community.

The first article, by Maria Lizete Silveira and Otávio Ribeiro de Medeiros (University of Brasilia, Brazil), investigates the impacts of Personnel Costs and Defined Profits (BD) on the value of Brazilian companies. The study focuses on the 29 companies listed in the IBrX-100 with BD-related disclosures, between 2013 and 2019 and the panel data used. The authors point to a positive relationship between market value and Personnel Costs possibly because they generate value creation for the entities and have a negative relationship with BD, likely due to the risks identified, leading managers to freeze or replace these plans.

In the following article Devora Carolina Solano, Jonathan Leodany Zaruma, Gustavo Geovanny Flores, Carlos Armado Romero (University of Cuenca, Ecuador) and Hernán Pedro Vigier (National University of the South, Argentina) address the contrast of the theoretical foundations of Financial Hierarchy and Best Financial practice through panel data methods applied to Ecuadorian commercial enterprises. The results show that the shortfall in cash flow, size, growth opportunity and asset tangibility define the capital structure. In addition, according to the authors, it constitutes a contribution to the scientific debate on the modern Financial Hierarchy theory, noting that short- and long-term financing decisions are based on the internal resources generated and the investments required for normal business operations.

Silvana Astudillo, Vanessa Bermeo, Ana Serrano, and Rolando Andrade (Catholic University of Cuenca, Ecuador), in the following article, perform a comparative analysis of entrepreneurship among students of two higher education institutions in Ecuador – public and private. They present an exploratory study of 1507 students to assess whether there are significant differences in desirability, feasibility and entrepreneurial intentions. For the authors, the results reveal that there are differences of intent between the two student samples. Moreover, gender only influences entrepreneurial intent in private universities, and family members influence entrepreneurial intent in both institutions. There are also implications for educators to strengthen entrepreneurship programmes.

The article by Eugeny Kolpak (Saint Petersburg State University, Russian Federation), Viktoria Borisova and Elena Panfilova (State University of Management, Russian Federation) aims to identify and assess the impact of economic digitalisation vectors that directly affect the competitiveness of countries and regions. Thus, to assess the level of digital competitiveness, the study graphically showed the competitiveness vectors in a three-dimensional space, using three axes (knowledge, technology and future preparation) as integral indicators in 63 countries. For the authors, comparing their general economy and levels of digital competitiveness led them to draw conclusions regarding the close correlation of these indicators.

The last article analyses the determinants of the decision to implement social innovation activities in Chilean companies, using a probit model of determinants. For Francisco Galvez-Gamboa and Andrés Valenzuela-Keller (Catholic University of Maule, Chile) the findings show that the relevant factors are those associated with experience of prior innovation, that companies have networks of cooperation with universities and the best qualification of their human capital. They also conclude that size is a relevant factor enabling the understanding of social innovation in national enterprises, noting a gap between micro, small-and-medium, and large enterprises.

I would once again like to thank all those who made this journal possible: members of the Advisory Board, the Editorial Board, Editors and Associate Editors, assessors, authors and, last but not least, the readers.