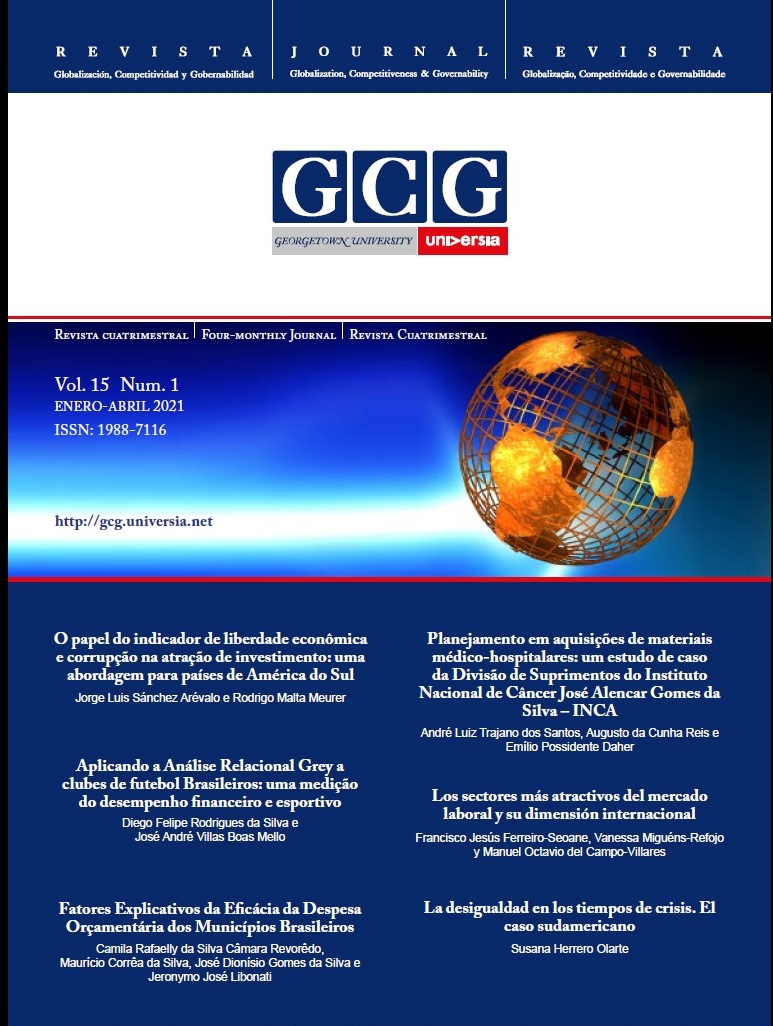 This issue of the Journal of Globalization, Competitiveness, and Governability continues with its commitment to our readers, in terms of frequency and quality criteria that are internationally accepted and audited by a number of institutions. GCG is currently indexed in: SCOPUS (Elsevier Bibliographic Databases. Scimago Journal Rank), Categories: Business, Management and Accounting, Economics, Econometrics and Finance; EconLit (American Economic Association's electronic bibliography); EBSCO Publishing databases (Business Source Complete; Business Source Premier; Business Source Elite; Fuente Académica Premier; Fuente Académica Plus); and ABI/INFORM (ProQuest; LATINDEX; REDALYC; Google Scholar Metrics. This drive for quality has seen GCG categorised as an A-level Journal (top category) of all the Spanish Journals dealing with the human and social sciences by Web of Science and/or SCOPUS (ISOC-CSIC). In 2020, we received 63 articles, with an acceptance rate of 15.87%.

The purpose of the first article is to assess the importance of indicators of economic freedom and corruption and their effect on countries' economies, as measured by the attraction of foreign direct investment. Jorge Luis Sánchez Arévalo and Rodrigo Malta Meurer (Federal University of Mato Grosso do Sul, Brazil) consider that private investment is closely related to the conditions that can provide a good relationship between a country and investors. These conditions include both economic and political aspects. In this context, it is important to consider income, corruption and indicators of trade and economic freedom as predictive variables, bearing in mind that these variables differentiate between countries that are more and less liberal. The authors conclude that according to the results there is a need for reforms (internal structural changes) to improve the indicators of corruption and economic freedom in the countries studied.

In the next article, Diego Felipe Rodrigues da Silva and José André Villas Boas Mello (the Celso Suckow da Fonseca Federal Centre for Technological Education, Brazil) apply a multi-criteria analysis to establish a relationship between the financial and technical performance of clubs in the Brazilian Série A, in order to evaluate performance. They take a quantitative approach using Gray's relational analysis tool using data from 2018. For the authors, Flamengo was identified as the club with the best technical performance and among the best clubs also in financial terms, along with Cruzeiro and Atlético-MG. They also conclude that the clubs that were poorly ranked in terms of financial indicators became champions in a number of tournaments played throughout the year.

Camila Rafaelly da Silva Câmara Revorêdo; Maurício Corrêa da Silva; José Dionísio Gomes da Silva (Federal University of Rio Grande do Norte, Brazil); and Jeronymo José Libonati (Federal University of Pernambuco, Brazil) investigate the factors explaining the effectiveness of budgetary spending in Brazilian municipalities. To this end, they have carried out an analysis in 4,532 Brazilian municipalities using the Robust Tobit regression model. The authors conclude by identifying explanatory factors for the effectiveness of budgetary spending: the tax receipts; GDP per capita; small and medium sized municipalities compared to large ones; the municipalities of the South-East and South regions compared with those of the Centre-West; the managers, between 60 and 69 years of age who have completed secondary education and higher education. The results provide citizens with information on how to evaluate the performance of public administration, in relation to the aspect of its effectiveness.

There are many difficulties experienced by professionals responsible for planning the acquisition of medical and hospital equipment. In order to solve this problem, André Luiz Trajano dos Santos; Augusto da Cunha Reis and Emílio Possidente Daher (Federal Centre for Technological Education "Celso Suckow da Fonseca" - CEFET/ RJ, Brazil) investigates the same problem through a case study method of the National Cancer Institute José Alencar Gomes da Silva (INCA). To this end, in an exploratory and descriptive qualitative approach they use a survey as a source of documentary evidence, observation and semi-structured interviews with professionals from the institution. The authors present a summary table of the problems reported by purchasing planners in carrying out their activities, correlating them with the proposed solutions, among which the following stand out: improve the speed of administrative processes; combat the lack of qualified labour; and improve the efficiency of the logistics data information system.

The aim of the following article is to analyse the economic sectors of the most attractive organisations in the Spanish labour market in the period 2013-2019. Francisco Jesús Ferreiro-Seoane, Vanessa Miguéns-Refojo (University of Santiago de Compostela), and Manuel Octavio del Campo-Villares (University of A Coruña, Spain) use data from the ranking of the 100 most desirable companies to work for published by the magazine Actualidad Económica (RAE), selecting four variables: sector of activity, geographical area, size and stock-market listing. The authors conclude that the most valued companies are Anglo-Saxon in the energy and financial sectors of the economy, and that the size and share price also influence their valuation significantly.

I would once again like to thank all those who have made this journal possible: members of the Advisory Board, the Editorial Board, Editors and Associate Editors, assessors, authors and, last but not least, the readers.