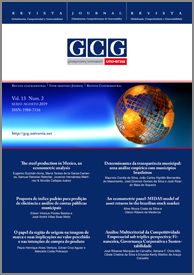 In the first article, Eugenio Guzmán-Soria, María Teresa de la Garza-Carranza (Technological Institute of Celaya-Campus II, Mexico), Samuel Rebollar-Rebollar, Juvencio Hernández-Martínez (Autonomous University of the State of Mexico, Mexico) and Nicolás Callejas-Juárez (Autonomous University of Chihuahua, Mexico) seek to determine the price elasticity of Mexican steel production and to quantify the impact of the international price on the wholesale price in Mexico. To do so, the authors use a simultaneous equations model with annual information from 1980 to 2017 composed of three linear regression equations. Steel production in Mexico responds inelastically in the short and long term (0.0425 and 0.2419% respectively) to changes of 1% in its own price. They conclude that the international price of steel is the wholesale price in Mexico at a level of 0.05 for each unit percentage variation in the former.

Edson Vinicius Pontes Bastos and José André Villas Boas Mello (Federal Center for Technological Education "Celso Suckow da Fonseca" - Cefet-RJ, Brazil) use the Fleuriet dynamic model and the multiple regression statistical method to perform a financial analysis of the public accounts of the cities of Rio de Janeiro. According to the authors, the results show that for the purposes of classification in terms of solvency, the municipalities are grouped by the types of financial situation proposed by the model. In conclusion, part of the variation in financial equilibrium can indeed be explained by the circulating capital and the need for working capital variables. The significance of this study is that it provides municipal managers with a viable method to analyse their balance sheets and foresee unsustainable financial levels.

In the following article, Paulo Henrique Alves Ventura (Companhia Energética do Estado de Pernambuco, Brazil), Edvan Cruz Aguiar, Manoela Costa Policarpo (Federal University of Campina Grande, Brazil) analyse the role played by the region of the product in construction of the brand image and its relationship with perceived value and purchase intention. The authors conclude that the region of origin plays an important role in the consumer’s behaviour, especially in formation of the brand image, the perceived value and the intention to purchase the product. Their findings also suggest that information on the origin of the product plays the role of premise for the consumer's purchasing behaviour.

In the next article, Aline Moura Costa da Silva (Federal University Fluminense - UFF, Brazil) and Otávio Ribeiro de Medeiros (University of Brasília - UnB, Brazil) present the estimation and analysis of an econometric model to explain and forecast returns on shares on the Brazilian stock market. Since it enables estimation of regressions with variables measured at different frequencies, the model uses the MIDAS regression method. The sample for the study includes shares of non-financial institutions of the Brazilian stock market between 2010 and 2016. The authors conclude that the model is a robust tool for explaining and predicting the individual performance of shares on the market.