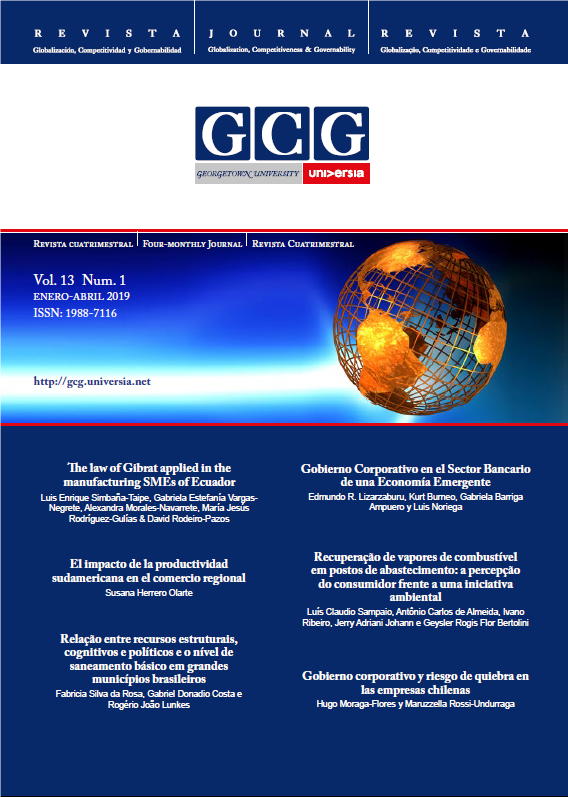 In the first article, Luis Enrique Simbaña-Taipe, Gabriela Estefanía Vargas-Negrete and Alexandra Morales-Navarrete of the University of the Armed Forces ESPE; María Jesús Rodríguez-Gulías (Universidade da Coruña) and David Rodeiro-Pazos (Universidade de Santiago de Compostela) analyse the relationship between the size of companies and their growth. They compare the application of Gibrat's law in a sample of 2,915 Ecuadorian manufacturing companies in the 2012-2016 period. This research performs a regression by quantiles for the panel data in order to establish the effect of business feature-type and financial performance variables on the company's growth measured on the basis of sales and the number of employees. The results show that small enterprises grow at higher rates than bigger companies. In the authors’ opinion, this evidence enables them to reject Gibrat's law, since there is a negative relationship between the size and the growth rate of manufacturing companies.

To Susana Herrero Olarte (Universidad de Las Américas, Ecuador), South America’s low productivity leads inevitably to the need to import from more productive countries and to the fact that countries that do export, do so with limited added value. This article intends to analyse the question of whether Latin American intraregional trade is influenced by changes in productivity, and if so, to what extent. To do so, she uses a data panel linear regression model using data with random effects for the period 1992 - 2016 that takes South American intraregional trade as the dependent variable and productivity and the exchange of goods not subject to tariffs between the countries of the region as independent variables. To the author, the results show how both variables effectively influence South American intraregional trade with similar levels of incidence in each case.

The aim of the next article is to analyse the relationship between structural, cognitive and political resources and the level of basic sewage in large Brazilian municipalities. To do so, Fabricia Silva da Rosa, Gabriel Donadio Costa and Rogério João Lunkes (Universidade Federal de Santa Catarina, Brazil), analyse the 241 largest Brazilian municipal districts. The results obtained show that basic sewage is still in the incipient stage in large Brazilian municipalities. On average, the population of Brazil has better access to water supply than to wastewater treatment and the country’s northern region has a lower average implementation rate than the rest. The study reveals that the available structural resources directly influence the municipalities’ capacity to serve the population and that the age and training-related profile of the mayors has a significant influence in this respect. However, the study cannot confirm the influence of gender or political affiliation on these issues.

In view of the growing relevance of corporate governance and the lack of empirical evidence on banks in emerging markets, Edmundo R. Lizarzaburu (ESAN University, Peru), Kurt Burneo (Universidad Católica de Perú), Gabriela Barriga Ampuero (Consultant) and Luis Noriega (UCV University - Chimbote campus) have researched the relationship of application of good corporate governance practices with the monetary value of listed banks in an emerging securities market such as the Lima Stock Exchange. The authors use a model that evaluates Tobin's Q ratio, leverage ratios, portfolio quality, efficiency and return on assets (ROA) and the dichotomous variable with respect to inclusion in the Good Corporate Governance Index. They conclude that good corporate governance practices contribute to increasing the monetary value of the most representative companies in the banking sector.

Finally, using the Z-score model constructed by Edward I. Altman, Hugo Moraga-Flores and Maruzzella Rossi-Undurraga from Universidad Andres Bello in Chile, investigate the features of companies that are adopting corporate governance practices in Chile and the extent to which this adoption affects the financial solvency of the companies involved. To the authors, the statistical tests reveal low adoption and high heterogeneity of the economic sectors and sub-sectors in this respect. A relationship cannot be established between adoption of corporate governance practices and the degree of solvency measured through the Z-score model, although a relationship was established with two of the ratios that comprise said model.